Home » America and the dollar illusion

From World War for Wealth: The Global Grab for Power and Prosperity, by Gabor Steingart

The two things investors crave most are high yields and high security. Since you can never have both at the same time, the moods of investors are like an emotional roller coaster. They shift constantly from fear to greed and back—although major investors, like corporations and states, prefer security over fancy returns. Their fear is stronger than their greed. They’ll freely relinquish the really fat profits as long as the stability of their billions is guaranteed.

Few countries are able to provide the greatest possible security in the face of these dangers. They include the United States and Switzerland. Indeed, this security is why the dollar isn’t just used in trading and investment, but also functions as the world’s reserve currency. Almost every country in the world distrusts its own currency to the extent that it prefers to invest the money from its treasury in the United States.

Thus, those who have money prefer to keep it in dollars. The dollar has remained the world’s currency anchor. As long as this anchor rests firmly on the ocean floor, stability is guaranteed for the national economies that invest in the dollar. But if that anchor should tear itself loose and begin to drift freely in the ocean of global finance, the chaos that ensues would result in trouble for more than just exchange rates.

But does no one see that the tension between the dream and the reality [of the American economy] is increasing and that this tension will snap, leading to suffering for millions?

Of course they see it! Investors can see what is happening. It even scares them. But they keep buying dollars as though possessed. The greater their doubts, the more greedily they order dollars. The investor creates the security he’s purchasing by the very act of purchasing it. If he were to stop buying dollars tomorrow, suspicion about the currency would spread and insecurity would grow. Then the dream would end. The dollar would start to falter and all the wealth held in dollars would lose its value. That’s not something investors want to see happen.

The only way to fight a weak dollar is to strengthen it. Many people no longer care whether the U.S. currency still justifies the faith people seem to have in it. The new game, which amounts to playing with fire, works exactly the other way around: The dollar deserves the faith it gets because otherwise it loses that faith. Dollars are bought so they don’t have to be sold. The dollar is strong because that’s the only thing that can prevent it from growing weak. Reality is ignored because only by ignoring it can the dream come true. Or, to put it still more clearly: Behaving irrationally has become rational behavior.

Everyone knows how dangerous the game is, but continuing to play it strikes them as less dangerous than quitting.

Experts have often forecast the effects of a dollar meltdown. If the downward trend were to begin, interest on credit would rise step by step in an attempt to curb devaluation. That way, the dollar crisis would spread from the world of currencies to the real world of factories, businesses and household accounts within days. Major and minor private investments yield lower returns when interest rates climb. People would start to save, the economy would falter and shrink. The first mass layoffs would arrive soon afterwards. U.S. citizens would have to once more drastically reduce their level of consumption, as unemployment and waves of bankruptcy would shake up the country.

Millions of households would become unable to pay back their bank loans. Then real estate prices and share values would begin to drop, having been overpriced for years. When the real estate bubble bursts, consumption inevitably dwindles even further. The hunger for imports would fade, causing problems for exporting countries as well. It would only be a matter of days before newspapers would once more feature a term that seemed to have disappeared decades ago: world economic crisis.

Investors can see the relative weakness of the U.S. economy. Everyone knows the dream of the stable economic superpower has ended, but everyone is keeping his eyes shut just a little longer.

Government bonds and shares don’t have any objective value—nothing you can see, weigh, taste or even eat. Their value is measured by investors’ faith that the purchasing power of $1 million will still be $1 million 10 years from now. This faith is measured on the markets almost every second—and the measure used is nothing but the faith of other investors. As long as the faithful outnumber the skeptics, everything works out fine for the dollar (and the world economy). The trouble starts the day the scale begins to tip.

So who will be the first to destroy the dollar illusion? Why should the central banks of Japan or Beijing throw their dollars onto the market? What sense would it make to send the United States into a deep crisis when that crisis could drag all the other states along?

The underlying motive is the same as the one that once prompted investors to buy dollars—fear. This time it is fear that someone else may be faster, fear that the dollar’s strength won’t last, fear that every day spent waiting may be one day too long. It’s fear that the herd instinct of global financial markets will set in and overtake those who can’t keep up.

These days, the dollar is making a lot of people uncomfortable. One morning many dollar-owners will wake up and look at the facts about the U.S. economy without their rose-colored glasses. The United States has sold more security than it has to offer.

The dependence of foreign central banks on the dollar will defer its crash, but it won’t prevent it. Today’s snowdrift will become tomorrow’s avalanche. The masses of snow are already accumulating at breathtaking speed. The avalanche could happen tomorrow, in a few months or years from now. Much of what people today think is immortal will be buried by the global currency crisis—perhaps even the leadership role of the United States. 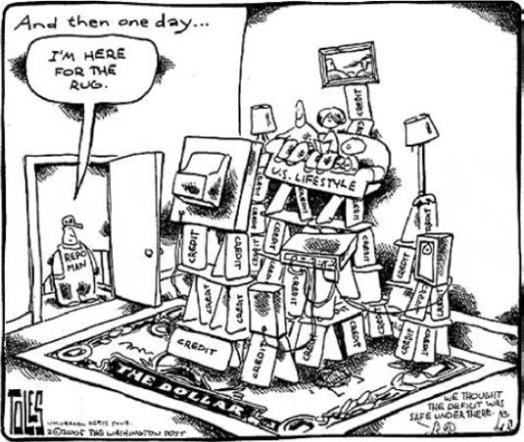 (Commentary:) The dollar is only propped up by people’s faith in it. But now that investors and governments are starting to lose faith in it, they’re having to pretend that they still have the faith they once had, or others will start losing their faith and everyone will start dumping their dollars. And since there are so many dollars floating around the world, propped up by nothing but that misplaced faith, people wouldn’t be able to get rid of them quick enough to avoid huge losses.

So the show goes on, with investors and governments nervously eying each other, keeping an eye on anyone who might start edging out of dollars. And some smart governments already have, changing some tiny percentage of their reserves over to euros or some other currency, so they don’t have quite as many dollars as they used to. But if some big investor or foreign central bank got a little hasty, or some sharp shock in the world spooked these investors and banks and they started getting rid of their dollars more quickly, it could quickly turn into a panic—which is what they used to call financial crises before they started calling them “depressions.”

People panic and sell their dollars, but no one wants to buy them, so they drop the price, and the herd instinct kicks in and others stampede and want to sell as well, and the supply of dollars keeps going up while the demand keeps going down, and the economy spirals downward until it crashes—kaboom! It’s coming one of these days, when the expanding green paper pig will pop and deflate, losing all its hot air. It’ll happen in the Lord’s time, no matter what the false prophets of economic prosperity say!